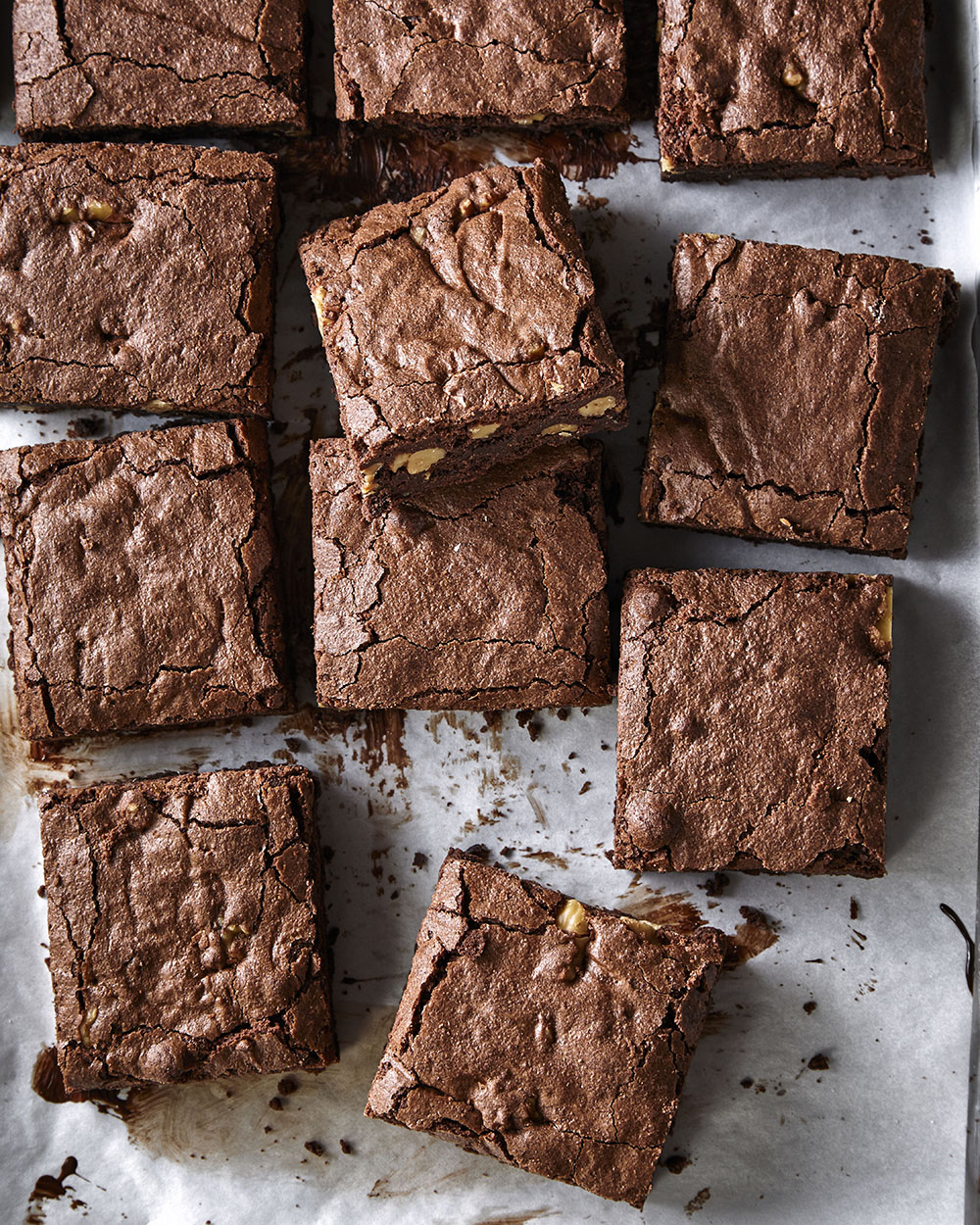 From Zingerman’s Bakehouse by Amy Emberling and Frank Carollo with permission by Chronicle Books, 2017

AMY: Our brownies are iconic Zingerman’s treats. Many Deli Reuben sandwiches are followed by one of these fudgy, rich brownies. They were first developed at Zingerman’s Delicatessen by Connie Gray Prig before the Bakehouse started and were simply referred to as Connie’s brownies. They made them Deli big, each a quarter pound. Just as popular as the brownies were the brownie trimmings—the crispy edges that the Deli bakers cut off and sold in bags. The Bakehouse later took over baking a handful of items that were being made at the Deli, brownies being one of them. I was confused by the brownie trimmings—I didn’t see a reason to have this “waste,” which was the result of baking brownies on sheet trays rather than in proper baking pans. If we just baked them in an appropriate pan, we could eliminate the unattractive edges. (I also prefer interior pieces, so I couldn’t imagine that anyone really liked the
edges.) We made that change in 1995, and some customers still reminisce about the brownie edges! We soon developed other brownie flavors—coffee, raspberry, ginger— but simpler versions proved to be most popular. Here are our recipes for our biggest sellers.

1. Preheat the oven to 350°F [180°C]. Spray a 9-by-13-in [23-by-33-cm] pan with nonstick cooking spray.
2. In a double boiler, melt the chocolate and butter. Set aside.
3. In a medium bowl, combine the pastry flour and baking powder. Mix with a whisk to eliminate any
lumps of flour and to distribute the baking powder evenly.
4. In a large mixing bowl, combine the eggs, sugar, salt, and vanilla. Beat with a whisk until well combined and aerated, about 5 minutes. If you are using a stand mixer, use the whisk attachment on medium speed for this step. Add the melted chocolate/butter mixture to the egg mixture and whisk to combine evenly. Stir in the dry ingredients, using a rubber spatula. If using a stand mixer, use the paddle attachment for this step and mix on a low speed.
5. If you are making Black Magic Brownies, you are done mixing and can move to step 6. If you are making Magic Brownies, toast the walnuts. Place the walnuts on a sheet tray in a 325°F [165°C] oven for 10 to 15 minutes, or until they’re a deep golden brown. Let cool. Add the toasted walnuts to the batter and mix gently simply to distribute them evenly, then go to step 6. For Buenos Aires Brownies, see the directions that follow.
6. Pour the batter into the prepared pan. Carefully spread it to the corners of the pan in an even layer. Bake for 40 to 45 minutes, or until a toothpick inserted in the center is clean.
7. Remove from the oven and cool on a cooling rack for at least an hour. Cut into 12 squares, using a sharp knife to avoid crushing the top. Chilling the brownies before cutting may help the squares look more beautiful, but they taste better at room temperature.

Buenos Aires Brownies
1. Warm the dulce de leche slightly, on the stove or in a microwave. This will make it more spreadable. Place two-thirds of the brownie batter in the pan and spread evenly to cover the bottom. Spread the dulce de leche out evenly over this layer of batter. Top with the remaining brownie batter and spread to cover the dulce de leche. Sprinkle the top with Demerara sugar. If you like sweet and salty desserts, also sprinkle with a little sea salt.
2. Bake for 45 to 55 minutes. Cool and then enjoy. These cut more easily if they are refrigerated.

DULCE DE LECHE
Unfamiliar with dulce de leche? It is a staple sweet spread, like a milk jam, used in South America in baking and as a condiment on things like bread and ice cream. It literally means “sweet of milk” and is made by slowly heating milk, sugar, and vanilla. The mixture thickens and then the sugars caramelize and it turns a butterscotchy color. There are many recipes available to make it yourself. Prefer to purchase it? Our favorite brand is La Salamandra from Argentina. They make it with only milk, sugar, and vanilla, no additives or preservatives. La Salamandra is located near the historic towns of Lujon and Capilla del Señor (50 miles from Buenos Aires). They use milk from their own grass-fed herds.