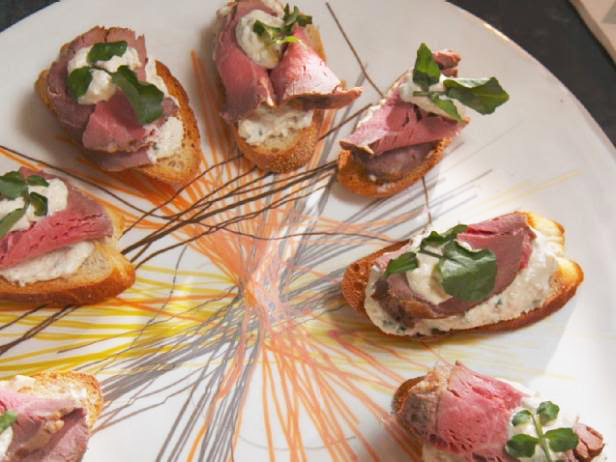 Serves 10
I love this as an appetizer for any party because it’s delicious made ahead of time and served warm or at room temperature. It’s festive, pretty and delicious.

For the beef: Preheat the oven to 500 degrees F.
Place the beef roast on a baking sheet, drizzle with the olive oil and season liberally with salt and pepper. Rub the oil and seasoning evenly over the meat.
Roast until an internal thermometer reads 125 to 135 degrees F for rare to medium rare, about 20 minutes. Remove from the oven, tent with aluminum foil and let rest until it reaches room temperature, at least 20 minutes. Transfer to a cutting board and thinly slice trying to remove grizzle and any extra veiny pieces.

For the crostini: Turn down the oven temperature to 400 degrees F.
Put the baguette slices on a baking sheet in 1 layer. Drizzle with the olive oil and sprinkle with salt and pepper. Bake until golden brown and toasted, about 5 minutes.

For the horseradish sauce: Add the Tofutti sour cream, applesauce, horseradish, mayonnaise, breadcrumbs, chives and dill to a medium bowl and mix until combined. Season with salt and pepper.