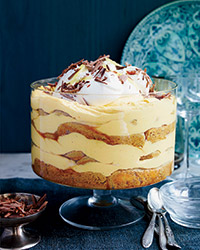 In a large bowl, whisk the pumpkin puree with the brown sugar, ginger, cinnamon, salt, nutmeg and 1/2 cup of the granulated sugar. Add the tofutti cream cheese and 1 1/2 cups of the pareve whipping cream. Using an electric mixer, beat the pumpkin mixture at medium speed until soft peaks form; do not overbeat.

In a medium bowl, whisk the brewed coffee with 2 tablespoons of the granulated sugar until it’s dissolved. Dip both sides of 6 ladyfingers in the coffee and arrange them in a single layer in a 4-quart trifle dish. Spread 1 cup of the pumpkin mousse on top. Repeat the layering 5 more times, ending with a layer of the pumpkin mousse. Cover and refrigerate the tiramisu overnight.
In a large bowl, using an electric mixer, beat the remaining 1 cup of whipping cream with the remaining 2 tablespoons of granulated sugar until soft peaks form. Dollop the whipped cream over the tiramisu, garnish with shaved chocolate and candied ginger and serve.