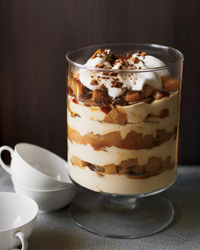 In a small microwave-safe bowl, sprinkle the gelatin over 2 tablespoons of water. Let stand until softened, about 5 minutes. Microwave at high power for 5 seconds, just until the gelatin is melted. Transfer the gelatin mixture to a bowl and add the cream cheese and the remaining 1/2 cup of caramel sauce. Using an electric mixer, beat at medium-high speed until smooth, about 2 minutes.

In another bowl, whip 1-1/2 cups of the cream until firm peaks form. Fold the whipped cream into the cream cheese mixture.

In a bowl, using an electric mixer, beat the remaining 1 1/2 cups of cream until soft peaks form. Dollop the cream over the trifle and garnish with crushed gingersnaps.