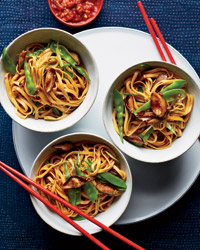 My kids love this Chinese food knock off. I throw in leftover chicken or steak to make it full of protein.

Bring a large saucepan of water to a boil. In a small bowl, combine the chicken broth with the soy sauce, oyster sauce, sesame oil and the 1 teaspoon of chile sauce. Add the linguine to the boiling water and cook until al dente, about 3 minutes. Drain and rinse the linguine briefly.

3 thoughts on “Lo Mein Noodles with Mushrooms and Snow Peas”