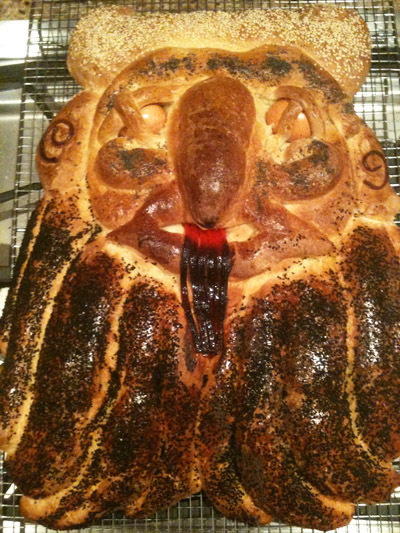 Try this unique and spectacular bread for your Purim seudah – you will wow your kids and your guests!

Years ago, we visited the home of another young couple for a Purim Seudah. The couple was Moroccan and the woman was an accomplished traditional cook. To begin the meal, she brought out a beautiful Moroccan Purim bread called “Ojo de Haman”, crowned by a hard-boiled egg. One of the men at the table gamely plucked out the egg. He explained that this action symbolized the destruction of Haman in Megillat Esther. Well, I had never seen such a thing!

When I started baking bread I immersed myself in the study of all the different types of challah. I saw that several Sephardic communties have their own type of Purim breads and pastries in many different shapes and sizes, some with one egg, some with two. The first time I made a Purim bread, I made a bread with one hard boiled egg, much like the “ojo de Haman” made by my friend.

The second or third year I made it, I was invited to a large Purim Seudah. Rather than make many small “Ojo de Haman” breads, I decided to make one huge bread with two ojos, or eyes. I called it the “Ojos de Haman” and created a bread version of the head of Haman. People loved it! Kids ran to pluck out those eggs and vanquish Haman. And now, whenever we go out for our Purim Seudah, I know what I’ll be asked to bring!

Below is the recipe for “Ojos de Haman”. For a large Seudah, I triple the recipe. The recipe itself is a Challah recipe I have been using for years. Made in a food processor, this dough is quick and easy to make. Putting the “Ojos de Haman” together is a fun project. Just leave yourself 20 minutes or so to patschke with it!

In the work bowl of a 14-cup food processor, place the flour, sugar, yeast and salt. In a two cup glass measuring cup, place the egg and just enough canola oil to total ½ cup. Add to this 1 ½ cup warm water. Place the top on the processor, and turn it on. Pour in the water and, when the dough just forms one cohesive ball, allow the machine to continue running just 60 seconds to complete kneading.

Place the dough in a large mixing bowl that has been sprayed with non-stick cooking spray. Rotate the dough to coat with the spray and cover the bowl of dough loosely with plastic wrap.

Allow the dough to rise until it has doubled in size, about 1 to 1 ½ hours. Punch the dough down to remove air bubbles. Spray a large cookie sheet with non-stick cooking spray and lightly dust it with flour, cornmeal or polenta.

And now the fun begins! Did you ever play with Mr. Potato Head as a child? Well, Haman is a lot like that!

First, divide the dough into thirds. Cut about 1/4 of the first piece off, and form the rest into a round disc, about 4 inches across. This is the face. Place it just above the center of the prepared pan. Form the smaller piece into a snake that tapers at both ends and place it on the top of the head.

Divide the second piece of dough into quarters.

Form the remaining piece into a square and then cut it in half to form 2 triangles. Place these two ears on either side of the face.

• Take the first quarter. Roll it into a 7″ long snake and make it into a uni-brow.
• Take the second quarter and cut it in half. Shape one half like a long potato. This is the nose. Center it on the face. Place the two eggs on either side of it and press them gently into the dough. Pull a walnut-sized piece of dough from the next piece and form 4 skinny 5″ long snakes. Use these small snakes to make and “X” over each eye.
• Divide this piece into a smaller and a larger half. Make the smaller piece into a short snake with tapered ends. Cut a slit into the middle. This is the mouth. Make the remaining piece into a large snake. This is the mustachio. Center it under the tip of the nose and curl up the ends. Take the mouth and place it beneath the mustachio to finish the face.

Divide the last piece into eighths and make each into a snake.

These make up the beard. Affix each to the bottom of the face. Spray the entire creation with Pam and gently cover it to rise for 45 minutes or so. 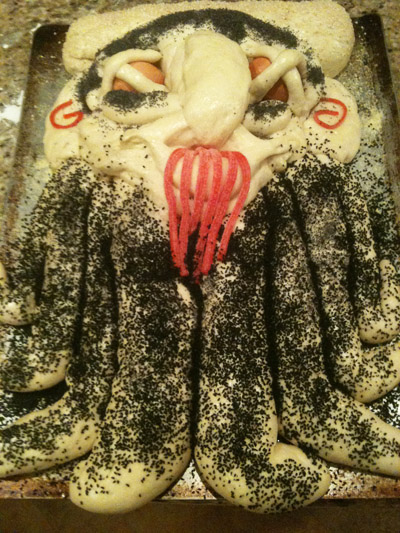 Preheat the oven to 325 degrees. Paint the surface of the bread with the egg wash and decorate the beard, eyebrow and mustachio with poppy seeds and the horns with sesame. Use fruit roll for the tongue and just generally have fun decorating! Place the pan into the preheated oven and bake for 30 minutes. Then raise the temperature to 350 degrees and bake until golden brown, about 20 minutes or so more.