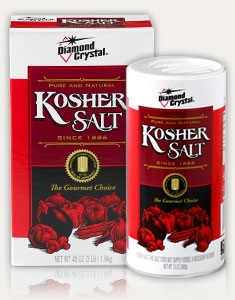 Kosher salt is the primary salt I use for general cooking (not baking, although that has become more popular too). Why do I use it? A few reasons…

First, the coarse texture makes it preferable to table salt fro general cooking. Its flaky texture makes kosher salt easier than fine-grained table salt to pinch and sprinkle. It sticks to foods better and dissolves more quickly. It results in milder salt flavor and more enhanced flavor from the food it is added to.

Second, although there is little chemical difference between kosher and table salt since both are made predominantly from sodium chloride, table salt often contains anitcaking agents and additives like sodium iodide, while kosher salt is typically additive-free. Bottom line it’s a purer ingredient.

• Salt your vegetables after roasting. Salt draws out water in vegetables so they will stay crisper if you salt them after cooking. Super simple side dish is any vegetable drizzled olive oil, roasted in a 400-degree oven, for 10 – 25 minutes, depending on the vegetables. Toss with ½ teaspoon kosher salt.
• When substituting kosher salt for table salt in a recipe, use about ¼ to ½ teaspoon more kosher salt. Taste before adding too much though.
• Sprinkle kosher salt on super sweet brownies or other chocolate ganache desserts. It gives the dessert a great sweet and salty contrast.
• Sprinkle your challah with egg wash and a little kosher salt. Super tasty!

2 thoughts on “Why We Love Kosher Salt”