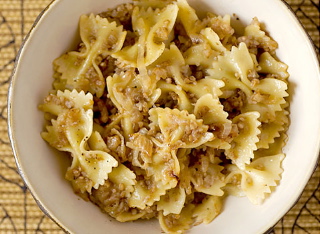 Recipe with a story, historic recipe, oldie but goody, this one is all of the above. Months ago I posted Grandma Tillie’s Brisket recipe [1] (my kids still say it’s the best brisket) and it caused quite a stir in my family. I got the recipe from cousin Esther who got it from her mother, my great Aunt Thelma. But cousin Amy said it’s all wrong and promised to send the original (Amy, we are all waiting for the actual recipe). In the process of hearing from my numerous distant cousins, this recipe started to be passed around. And since one of my sisters asked, “What is kasha varnishkes” and Ratner’s in NY is no longer in business, I had to share it with everyone. My Uncle Bobby swears it’s the best he has ever had.

In a large bowl, beat egg and add the Kasha and mix well.

Preheat oven to 250 degrees. Spread the kasha on a large cookie pan and dry the kasha in oven for an hour or more. Mix well every 20 minutes. This is the secret step known only to the true masters of Kasha Varnishkes, according to my grandmother.

Make the bow ties as per packages instructions.

Heat margarine in a large sauté pan. Add mushrooms and onions and cook until soft.

In a large pot (you can use the same one that you cooked the pasta in, unwashed) put in the kasha. Then, put in a speck of water to heat the pot. Add one cup of water and bring to a boil and stir. Add another cup of boiling water and keep stirring. (All the stirring is good exercise. That’s what Tillie used to say.)

Add one cup of chicken broth and let cook on a low temperature for 20 minutes. KEEP STIRRING. Add a dash of Kosher salt and pepper. Add the sautéed onions and mushrooms and add the bow ties to the mixture last. Do not overcook the pasta as the noodles will become mushy.