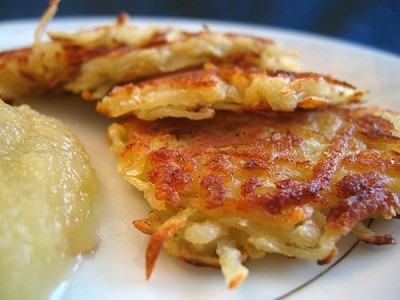 It’s that time of year again, latke making! Do you make the traditional potato latke or do you get a little fancier or more exotic? Better yet, do you make a different type for each night? GKC has posted many latke recipes and thought we would do a little latke roundup, some old and some new, just to refresh your memory and inspire some good latke making.

And remember these freezing tips will keep them fresh and delicious for all eight days.

The latkes are too greasy
The oil is probably not hot enough. Allow it to come back up to temperature between batches of latkes.

The latkes fall apart
Did you squeeze out excess moisture from the shredded potato mixture? Extra eggs, matzo meal, and shredded cheese will all help bind the mixture together if it seems too “loose.”

The potatoes turn brown
Keep peeled potatoes immersed in a bowl of cool water until the second you’re ready to shred them.

The latkes are still chewy and starchy on the inside
To remedy this problem, you can shred the potatoes more finely, make sure the oil is hot enough, make the latkes thinner, or pre-cook the potatoes.