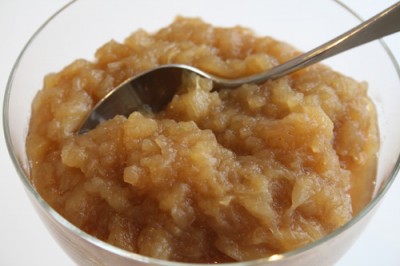 It just wouldn’t be Chanukah without doughnuts and latkes. And it wouldn’t be latkes without sour cream and applesauce. While there is certainly no lack of jarred versions, nothing beats homemade. And it’s so easy. Our family’s favorite go-to homemade applesauce is sweet without the addition of any sugar. Everyone, from young to old, loves it, even those who normally turn up their noses at fruit. You don’t even need latkes as an excuse to eat it! The more daring among you can try this caramel version with cumin but whatever your version, whether you eat it with latkes or alone, applesauce is a not-to-be-missed treat that you can eat year round. It is also a great after-school snack. Chag Sameach!

One thought on “Applesauce”