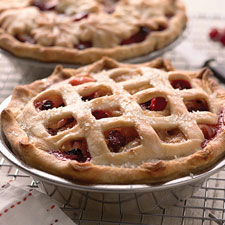 Preheat your oven to 425°F.   In a medium saucepan, cook the cranberries with the sugar, orange peel, flour and juice until the mixture is slightly thickened, about 4 – 5 minutes. Roll out the crust for the bottom of the pie and place it in a pie shell.   Sprinkle half the pecans on the bottom crust of the pie shell. Make 2 layers of apples on top of the nuts. Sprinkle these with cinnamon and dot with margarine. Pour the cranberry mixture over the apples and sprinkle on the remaining pecans. Cover with a latticed top.   Bake for 30 minutes or until the crust is golden and the berries are bubbly. Remove from the oven and allow to cool before slicing.

In a large bowl, combine the flour, salt and sugar.   With a pastry blender, two knives, or your fingertips, cut or rub half of the shortening into the flour mixture until it resembles cornmeal. Then take the remainder of the shortening plus the margarine and cut or rub it in until the largest pieces are the size of a dime, or flattened peas.   Sprinkle the ice water and vodka (if using), one tablespoon at a time, over the flour/fat mixture. With a fork, toss the mixture that you’ve just moistened and push it to one side. Continue until the dough is just moist enough to hold together. Then gather it into a ball (a bit like gently packing a snowball), cut it in half and flatten the halves into two disks. If you’re making a double-crust pie, make the piece for the bottom crust slightly larger, since it has to fit down into the pie plate.   Wrap the two pieces of dough and put them in the refrigerator to give them a rest for 30 minutes or more before rolling them out.