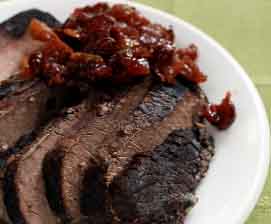 Prepare the brisket. Heat the oil over medium-high heat in a large, heavy-bottomed roasting pan, using two burners, if necessary, or in a wide 6-quart Dutch oven or flameproof casserole. Add the brisket and brown well on both sides, about 10 minutes. Transfer the brisket to a platter and set aside. (Alternatively, you might find it easier to sear the meat under the broiler. Just cover the broiler pan well with foil to minimize cleanup. Preheat the broiler. Place the brisket under the broiler, far side up, and broil for 5-6 minutes on each side, or until nicely browned. Move the meat around as necessary, so it sears evenly on the back and front portions. Transfer the brisket to a platter and set aside.) Preheat the oven to 325°F.

Pour off all but about 1 tablespoon of fat remaining in the pan and add the onions and leeks. Cook, stirring occasionally, over medium-high heat, until the vegetables are softened, 5-7 minutes. Add the garlic, carrots, and celery and continue cooking until the onions are golden, 7-10 minutes, stirring and scraping the pan to prevent scorching or sticking.

Lightly salt and pepper the brisket on both sides, and add it to the pan, fat side up, spooning the vegetable mixture all over the meat. Cover the pan tightly, and braise the brisket in the oven, basting every half hour, until the meat is very tender, 2 ½ – 3 ½ hours. (Turn the oven down to 300°F if the braising liquid begins to bubble rapidly.)

While the brisket is cooking, make the confit. In a 10 to 12-inch heavy skillet, warm the oil. Add the onions, season lightly with salt and pepper, and toss to coat with the oil. Cook, tightly covered, over the lowest heat, stirring occasionally so the mixture does not burn, for 1 hour, or until the onions are very soft and pale gold in color. Add additional salt and pepper to taste, the broth, and wine. Raise the heat and boil the mixture, uncovered, stirring, until all the liquid is evaporated and the onions turn golden. Taste and adjust the seasoning (it may take quite a bit of salt), then turn off the heat. Cover the mixture and keep it warm. Stir in the pomegranate seeds just before serving.

Transfer the brisket to a cutting board and cover it loosely with foil. Prepare the gravy. Strain the braising mixture, reserving the vegetables. Skim and discard as much fat as possible from the liquid. Puree the reserved vegetables and 1 cup of the defatted braising liquid in a food processor or a blender. Transfer the pureed mixture and the remaining braising liquid to a skillet and reduce the gravy over high heat to the desired consistency. Taste for seasoning.

Cut the brisket into thin slices across the grain at a slight diagonal. Spread the onion confit over a serving platter and arrange the sliced brisket on top. Ladle the hot gravy over the meat and serve immediately.

3 thoughts on “Brisket Braised in Pomegranate Juice with Onion Confit”