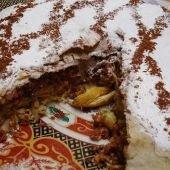 This recipe is a little more effort than others (although I have tried to simplify it) but it is just so good.

Heat oil in a large skillet with high sides over medium heat. Sauté onions and spices until soft – about 10 minutes. Add chicken, mix with onion and spices and continue to sauté until chicken is no longer pink. Sprinkle flour over chicken and mix well. Add broth and bring to a boil: reduce heat and simmer for about 20 minutes. Mix with cilantro if using and cool. When cool, mix with eggs and set aside. In the meantime, combine the almonds, ½ cup powdered sugar and cinnamon in the bowl of a food processor. Pulse until finely ground. Preheat oven to 350 degrees. Lightly grease the bottom and sides of a 14-inch round pan with some of the melted margarine. Start draping the filo dough across the bottom of the pan; place the sheets at right angles to each other so that there will be dough all around the outside as well. Brush with margarine every two sheets. Continue until filo is used up. Place a thin layer of the crushed almonds along the bottom of the dough, then a layer of half the chicken mixture, another layer of almonds, a layer of the remaining chicken mixture and a layer of the remaining almond mixture. Fold the excess dough over this mixture to cover. Brush with melted margarine and sprinkle with powdered sugar. Bake for 40 minutes – until top is golden. Sprinkle with more powdered sugar and some cinnamon if desired.