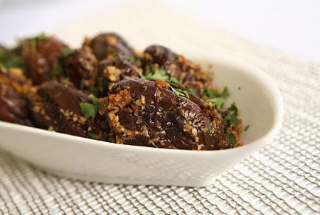 Using a coffee grinder or food processor, separately pulse the sesame seeds and peanuts to semi-coarse powders. You don’t want fine powders, but neither do you want chunks of peanuts in your filling. Remove to a bowl. Add the cilantro, sugar, salt, 2 teaspoons of the water, garlic, cayenne, and turmeric to the powdered mixture and mix well with your fingers. The mixture should become lumpy – if it doesn’t, add a few more drops of water. Taste and adjust the salt and sugar if needed. The filling should taste slightly sweet and a little salty.

Leaving the stem end intact, make 2 intersecting lengthwise cuts on the other side of each eggplant. You are basically making an “X”. Do not cut all the way through. Make sure to leave the stems on. Stuff each eggplant in the X with the filling, packing it down well. This is easier said than done – it will feel awkward, but just push in as much filling as the eggplant will take, using your fingers to gently pry open the eggplant. Here is where you will thank yourself for having followed the instructions to make the filling lumpy, since it sticks together better.

Heat the oil on a skillet large enough to hold all the eggplants in a single layer. Gently place each eggplant in the pan and turn the heat to medium. Turn the eggplants occasionally so they are evenly browned on all sides. Don’t worry too much if some of the filling spills out. Once all the eggplants are browned, pour in the remaining ¼ cup water, cover and cooked on low until tender, about 15 minutes. To check doneness, pierce the stem end of each eggplant with a small, sharp knife – it should slide in easily. The whole eggplant should feel soft to the touch as well.

Instead of pan bruising it, you may braise the eggplant in the oven:
Use an ovenproof skillet. After browning the eggplant on the stovetop, pour in the water, cover and transfer the skillet to a preheated 350 degree F oven and roast until the eggplant is tender, between 20 and 40 minutes, depending on the size of the eggplant.

Serve the hot eggplants immediately, 2 per person. This recipe can be made a day ahead. Simply reheat in a 375°F oven until warm.