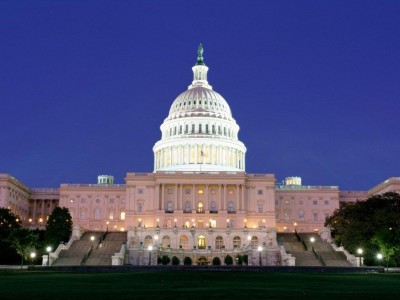 The best kosher food I had in Washington was at the White House Chanukah party. Or maybe it was just the atmosphere…okay, sorry, I just had to put that in!! (And it was a moving experience) But enough about me…

Washington is a great place to visit with kids. There are sights and experiences for all ages and the metro system makes everything easily accessible. Although my children usually cringe when they hear the “m” word (museum), it was not a problem here. The only one we couldn’t get them to was the Holocaust Museum.

We loved our tour of the Capitol, the Library of Congress and the Supreme Court. We all fantasized about “the path not taken” as we visited Justice Kennedy’s chambers. But particular hits with the younger set were:

The International Spy Museum: With its hands-on authentic spying gadgets and other simulated spying experiences, this was the all-round favorite.

The Bureau of Engraving and Printing: Everyone’s fascinated to see money being printed and disappointed by the lack of free souvenirs.

The Smithsonian Air and Space Museum and The Smithsonian American History Museum: At the risk of sounding sexist, the former was a big hit with the masculine contingent, the latter with its collection of costumes, enchanted the female crew.

The National Postal Museum: This is a tiny museum in the basement of Union Station but it lacked the crowds of the other venues and was also hands-on so everyone enjoyed it as well.

Without a car the dining options are more limited although some of the restaurants, including a pizza shop whose name I’ve forgotten, in the Rockville area deliver.

We really enjoyed the Café at the Jewish Community Center and returned numerous times. It seems to be temporarily closed; hopefully it will reopen soon.

We also ate at Eli’s Kosher Deli. The menu is typical deli – hearty and warm, food that hits the spot after a long day’s touring.

Both restaurants are centrally located and easily accessed. If you have a car and the family isn’t “starving”, there are many more dining establishments in Rockville, Maryland. We ate at the Royal Dragon, a typical American Chinese restaurant that easily satisfied the hungry hordes. Check online for other options.

There’s so much to see and do and learn in D.C. – who knew learning could be so much fun?