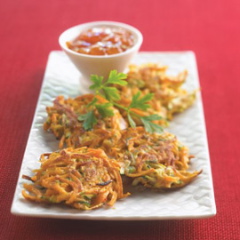 I make the same traditional recipe every year and I’ve never had any complaints. If it ain’t broke, don’t fix it.

In a food processor, using the grater blade, grate the potatoes and onions. Pour into a strainer and strain about the extra liquid. In a large bowl, mix the potato-onion mixture with the eggs,flour, salt and pepper. Heat oil in a large frying pan. When oil is hot, place large spoonfuls of the potato mixture in the pan and flatten slightly. Cook until crispy (3 to 5 minutes per side) and drain on paper towels. Can be frozen. Serve with homemade applesauce or sour cream.