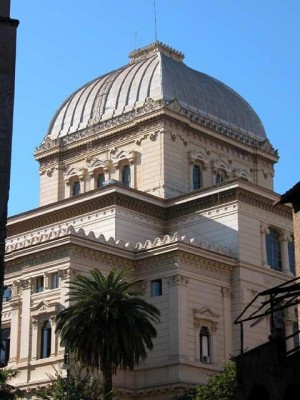 Over the summer our family spent a glorious 8 days in Italy. One of the reasons we chose Italy was for its plentiful kosher dining options. Rome, in particular, has at least a dozen kosher restaurants, located in 3 different neighborhoods, the largest of which is in the old Jewish Ghetto. There, in the shadow of the magnificent Great Synagogue of Rome (which also houses a fine Jewish museum), one can find a bevy of kosher restaurants and shops, most of which are located on or near a charming cobblestone street called Via Portico d’Ottavia. Although we peeked into several of the fast food joints, we were looking for serious Italian cooking and so chose the fine dining experience for all of our meals in Rome.

Our hands down favorite was the wonderful Nonne Bette, a lovely dairy restaurant specializing in traditional Roman Jewish food. Although it was hot and the air conditioned interior of the restaurant was most inviting, we chose to eat outside at one of the sidewalk tables. It proved to be a good choice, as the atmosphere on Via Portico d’Ottavia is lively and as the night wore on (Italians, like most Europeans, tend to dine on the late side) the narrow street took on the feel of a large, festive block party.

At 8 pages, the menu at Nonne Bette is filled with such tempting delicacies such as fiori de zucca (fried pumpkin flowers with mozzarella and anchovies), risotto scamorza e radicchio (smoked cheese and radicchio risotto), and of course pizza and pastas galore. Having just arrived from Israel and hungering for authentic Italian food, we ignored the page of Middle Eastern selections. Everything sounded wonderful, and choosing was difficult.

For starters, I ordered the carciofo alla giudia or artichoke Jewish style. It was delicious and unique – a whole artichoke, lightly seasoned and deep fried. My son’s ministre e fagioli (bean soup) was likewise superb — rich with a slight kick of something spicy. For the main course my husband had a lovely tagliolini cicoria, cacao e pepe (fresh pasta with chicory pecorino and pepper) and the kids had pizza and gnocchi al pesto. I still dream about my sformato di carciofi (baked artichokes in cheese sauce). These were no canned artichoke hearts…they were fresh and meaty and the parmesan cheese was bubbly and rich, bearing virtually no resemblance to the fluffy bland stuff that we shake out of a plastic red container at home. All agreed that the pizza, with its hot crispy, almost impossibly thin crust, was the best we’d ever tasted!

On both evenings we dined at Nonne Bette we found the service to be excellent – helpful, extremely friendly and efficient. Figure on spending around $50 per person, without wine.

Other restaurants we enjoyed in the Ghetto were Yovata, another dairy restaurant that serves great pizzas and produces their own artisanal cheeses, and Ba”Ghetto, a meat restaurant specializing in Jewish Roman and Meditteranean cuisine. For a full list of restaurants, bakeries and kosher markets in Rome visit www.Jewishitaly.org.

Holly Magady has recently re-discovered the joy and wonder of foreign travel and she hopes to do a lot more of it! She lives in Los Angeles with her husband and 3 children.

4 thoughts on “Eating Kosher in Rome”