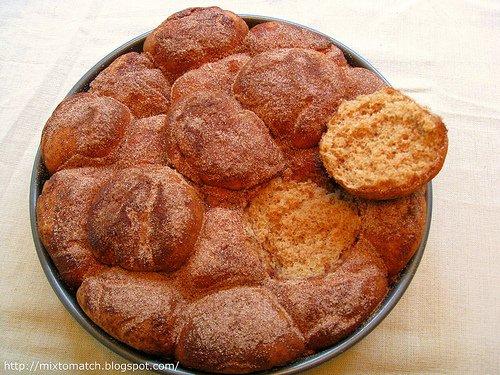 After challah has had its first rising, grease 4 – 6 round pans, depending on which recipe you used. Break dough into small pieces and form balls (about the size of a small tangerine). Dip each ball of dough in the melted margarine and then in the cinnamon sugar. Place in pan. Balls of dough should be close to each other but not necessarily touching. When a pan is basically filled, move on to another. The amount of margarine and cinnamon-sugar is enough for approximately one pan and you will need to make more depending on how many challahs you make. If you want to add chocolate chips –for a very sweet new year! – mix them into the dough before forming the balls. Cover and follow your regular instructions for challah baking.